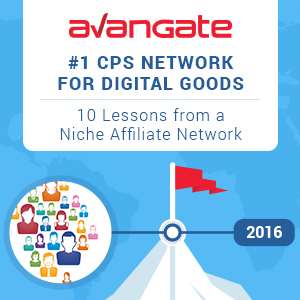 We recently got together with the management team at Avangate to talk about their journey from scrappy startup to market leadership. Over the last 10 years Avangate’s affiliate network has developed into the top digital download network in the world. We wanted to understand how the affiliate marketing landscape has changed in that time from the perspective of a niche network.

Takeaway: Content marketing works. It is a great way to convert prospects, educate affiliates within a specific niche and raise brand awareness.

Takeaway: The first million is the hardest. But it tells you that you are doing something right.

Takeaway: Affiliates are people too, and they like to have fun. Face-to-face interaction with affiliates helps create a more productive relationship and inspire other publishers.

Takeaway: Advertiser information pages for affiliates are the best source of new, qualified affiliates. Even though not all of these affiliates will actively sell at the same time, it’s easier to activate an affiliate than to recruit one.

Takeaway: Influencers are a great source of feedback, guidance and support in educating the market, especially if your solution is innovative and addresses a specific niche.

Takeaway: Avangate’s strategy was always to pitch the best-selling products to affiliates according to their traffic levels in order to help them grow faster. Sometimes, they would offer alternative titles to larger affiliates who preferred to avoid competition in the most saturated niches. They also helped advertisers to monitor competitor offers in order to find high-performing publishers.

Takeaway: Dedicated networking events are the way to go at industry conferences. Don’t rely on the ”official” parties, where there’s a lot of noise and you can’t talk business. Run your own events, where you’ll get the chance to gather qualified people from your industry and drive conversations on your own terms.

Takeaway: Avangate’s suggestion: when you want to run a contest, find ways to give chances to win to everyone who joins the contest rather than just those that drive high volumes.

Takeaway: Avangate were careful to set the correct expectations from the beginning with both clients and partners. MAS is a paid service and Avangate kept it in-house at first so they gained a good understanding of what was needed to deliver to expectations. Only then did they feel ready to outsource the offering.

Takeaway: Recognition can increase conversions for both advertiser and affiliate prospects.

What’s next for Avangate?

“During 2016 and going forward, our main goal is to continue growing the Avangate Affiliate Network into the #1 worldwide quality software & digital goods network. This growth will be closely tied to the evolution of the complete e-commerce solution that we offer.”

The Avangate Affiliates Network is the #1 CPS Network for Digital Goods and #4 CPS Network Worldwide as rated in mThink’s 2015 and 2016 Blue Book surveys. With over 22,000 products in its catalogue and having award-winning vendors as partners, our network has a proven track record of top-quality services and a dedicated team that has managed to bring the 10 years’ network to the peak of the affiliate marketing world.