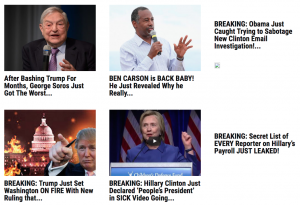 Strange but true: affiliates played a significant role in electing Donald Trump. With the launch of multiple “fake news” sites designed to draw in thousands of gullible news consumers, some affiliates made hundreds of thousands of dollars during election season.

It’s story that in many ways brings together the best of affiliates but with – perhaps – the most shocking of results. A bunch of super-motivated people saw an opportunity to drive huge amounts of cheap traffic, and made lots of money selling gold, boner pills and cures for “deep fat”.

While there is never any single reason why an election was won or lost, it is a fact that several things came together to make affiliate marketing part of the story of why Hillary lost:

Affiliates immediately noticed in the Republican voter base a core of consumers desperate for news that would confirm their worst fears about Hillary. Factories for fake news sprang up and the traffic volume they created was extraordinary. From a story in the Washington Post about one in particular, LibertyWritersNews:

“There were some days where we were getting $13, $14 per 1,000 views.” Between June and August, they say, when they had fewer than 150,000 Facebook followers, they made between $10,000 and $40,000 every month running advertisements…Then the political drama deepened, and their audience expanded fivefold”

The kind of stories they used to generate that traffic? Imagine the stuff your crazy uncle is going to tell you about your Thanksgiving dinner:

“Neither of them is particularly religious, but their readers are, so in their writing they ask God to bless the president-elect, and that works, too. So does exaggeration: “OBAMA BIRTH SECRETS REVEALED! The Letters From His Dad Reveal Something Sinister… .” And stoking fear: “Terrorists Have Infiltrated the US Government! Look Who They Want to ASSASSINATE!!” And inflaming racial and gender tension: “BREAKING: Michelle Obama holds Feminist Rally At HER SLAVE HOUSE!” And conspiracy theories: “BREAKING: Top Official Set to Testify Against Hillary Clinton Found DEAD!”

And in perhaps the saddest comment on how online marketing all-too-often works:

“There are times when Wade wonders what it would be like to write an article he truly believes in. “In a perfect world,” he says, it would have nuance and balance and long paragraphs and take longer than 10 minutes to compose. It would make people think. But he never writes it, he says, because no one would click on it, so what would be the point?”

The Washington Post article paints a great profile of the guys that did this. Read the entire article here.