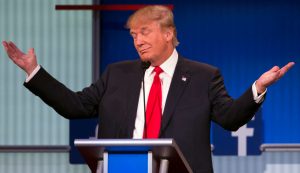 CPA networks are going to boom, payday loans are coming back big league and your $ex life is going to be so good, you won’t believe it. The election of Donald Trump isn’t just going to cause civilization to crumble, it’s also going to have major effects on the performance marketing industry.

Donald Trump is going to be a president unlike any that we have seen before. Almost completely uninterested in the detail of policy, he is however fascinated with deal-making. It is already clear that we can draw several conclusions about the impact of Trump on affiliate marketing:

For the first time since the 1930s the Republicans control the presidency and both houses of Congress, and they’re going to use it to cut taxes and government spending massively while also deregulating every business sector possible. FTC enforcement will rapidly reduce from the Obama years. The Wild West of the affiliate marketing industry is going to be making a comeback.

Elizabeth Warren’s CFPB has been effective in curbing the worst excesses of Wall Street and the banking industry. Nowhere will the Republican deregulation onslaught take effect more quickly than in financial services. Payday loans are going to be hot all over again, while “innovation” will produce a slew of new products that offer high margins while offering little value to the consumer.

Obamacare is going to harder to dismantle than many Republicans hope – it is hard to take health insurance subsidies away from millions of your supporters, after all – but there will be an ongoing drum-beat of health insecurity for much of the American population. Alternatives to high-cost pharmaceuticals are going to see high demand – supplements are going to be one of the hottest sectors in the industry for several years ahead.

CPA network owners should be rubbing their hands in glee with Trump’s ascendancy. The deregulation of the American economy is going to revitalize whole sectors of the industry. In addition, Trump will create an atmosphere of acceptance of close-to-the-edge marketing and salesmanship, perfect conditions for CPA networks to thrive.

5. The monetization of the American government

For the more ambitious among us who are able to cultivate connections at the highest level, there are going to be opportunities to monetize segments of the economy that have never been possible before. Paul Ryan is already talking about privatizing Medicare, and the three oldest Trump children will have roles in the Administration. It can only be guesswork at this point, but all indications are that the kids will be open for business. A prediction: they will all leave government when Donald does, and purely coincidentally, they will all be individual billionaires by that time.

Naturally, this is all speculation. But we would put money on it. Place your bets, folks. It’s going to a wild ride.