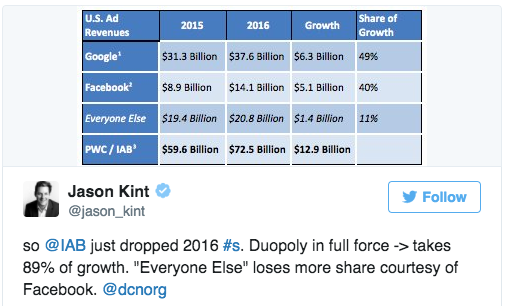 Last week saw the release of the Interactive Advertising Bureau’s year-end report for 2016. The good news is that digital ad revenue in the U.S. grew by more than 20% last year to a record $72.5 billion. The bad news is that virtually all of that growth went to just two companies: Google and Facebook.

What has come to be known by industry analysts as “The Duopoly” vacuumed up around $12 Billion of additional revenue in 2016, with no sign of slowing down. Everyone else? Maybe $1.4 Billion combined.

So what does this mean for the performance marketing industry?

First let’s get a grip of the data. Jason Kint’s estimates are shown in the attached graphic. He calculates that Google and Facebook’s combined share of industry growth was 89%. On the other hand, Brian Wieser of Pivotal Research believes the figure is closer to 99%.

Whichever figure is correct, it’s bad news for publishers that rely on advertising revenue for their income. Think of it: combine all the newspaper, TV, magazine, blog and video websites in the USA, and in combination they saw hardly a dollar of growth in their advertising revenue streams in 2016. How are they going to survive? Or attract new investment?

The answer is that they need to urgently develop new revenue streams, and if, like me, you spend a lot of your time talking to publishing companies, you already know that they are desperate to do just that. Subscriptions to premium content are a common attempted solution but it is an approach that can take a long time to scale. As a result, we see more and more sites turning to affiliate marketing as a way to grow revenues while – hopefully – also providing additional value to users.

This phenomenon is affecting some big players. Last year the New York Times spent $30 million to acquire The Wirecutter – basically an affiliate marketing-driven product review site. And BuzzFeed has been growing its affiliate efforts rapidly over the last 12 months, even to the point of essentially building its own affiliate network, as Jason Del Ray explains:

“BuzzFeed’s operation stands out for the size of the team working on it as well as the lengths it’s going to to grow the business. Case in point: BuzzFeed just built its own software tool that helps onboard more shopping sites that give BuzzFeed a cut of sales, and to help its writers estimate how much revenue a certain post will generate […] The first partner integrating with BuzzFeed’s new tool is Shopify, a public company whose software is used by about 400,000 businesses to create and run independent online shops. Shopify merchants that opt in will make their merchandise searchable to the BuzzFeed writers crafting these posts […] Each Shopify merchant gets a recommendation on how big of a cut they should give BuzzFeed per sale, but merchants ultimately can set any rate they choose. Still, the company expects most Shopify merchants to offer BuzzFeed anywhere from 10 percent to 25 percent per sale. That’s generally a bigger cut than most affiliate deals, but one which BuzzFeed commerce chief Ben Kaufman claims is fair since these merchants are circumventing retailers like Amazon, which would require their own cut.”

Most publishers aren’t going to be able to follow BuzzFeed’s lead in building their own network. Instead they will find their way to performance marketing as a solution. It is clear that the domination of Google and Facebook is going to cause a huge amount of pain for many of these companies. The performance marketing industry can and should be the cure for what ails them.

The Interactive Advertising Bureau’s year-end report for 2016 can be found here.