Congratulations to our number 1 ranked networks for 2019! Top 20! 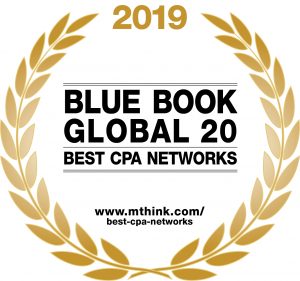 The BLUE BOOK results are in. 20,000+ industry professionals that participated in our survey, 150,000 data points analyzed and months of research have finally resulted in the new 2019 rankings.

Clickbooth takes the #1 ranked overall position for the third year running. This is a remarkable performance and reflects their commitment to ongoing investment in their platform and to delivering a fantastic partner experience.

This year, we have drilled into the voting results to look at the differences reported between advertisers and publishers. As a result we have two new awards:

In both cases these awards were largely driven by each network’s investment in their own proprietary tracking platform. MaxBounty have launched their new advertiser tracking interface – a first for them – and it has already received plaudits for its speed and for the way it enables advertisers to simplify their tech stack. Clickbooth provides their publishers with an unrivalled set of optimization and campaign management tools.

We have 18 other fantastic CPA networks in our rankings. These are the best networks worldwide, from almost a thousand candidate networks considered. Every one of these BLUE BOOK networks is highly recommended.

The #1 ranked network is Rakuten Affiliate Network. This won’t come as a surprise for most: Rakuten have delivered such a consistent level of excellence over the last few years that it has been very difficult for other networks to keep up.

Awin Group in the #2 position again this year is doing a terrific job following their successful acquisition of ShareASale, while CJ Affiliate By Conversant, FlexOffers, Impact Radius and PepperJam have all continued to attract big support from merchants and publishers on the BLUE BOOK response panel.

Our first BLUE BOOK ranking of the best Pay-Per-Call networks , and Aragon Advertising takes the #1 spot. Todd Stearn has built an assertive, professional network, well-positioned to deliver customer success in a fast-growing sector of the performance marketing industry.
PALO, HyperTarget Marketing, ReviMedia and Astoria also did well in a very vibrant field. We anticipate that Pay-Per-Call will see big movements year – these networks are ones to watch.